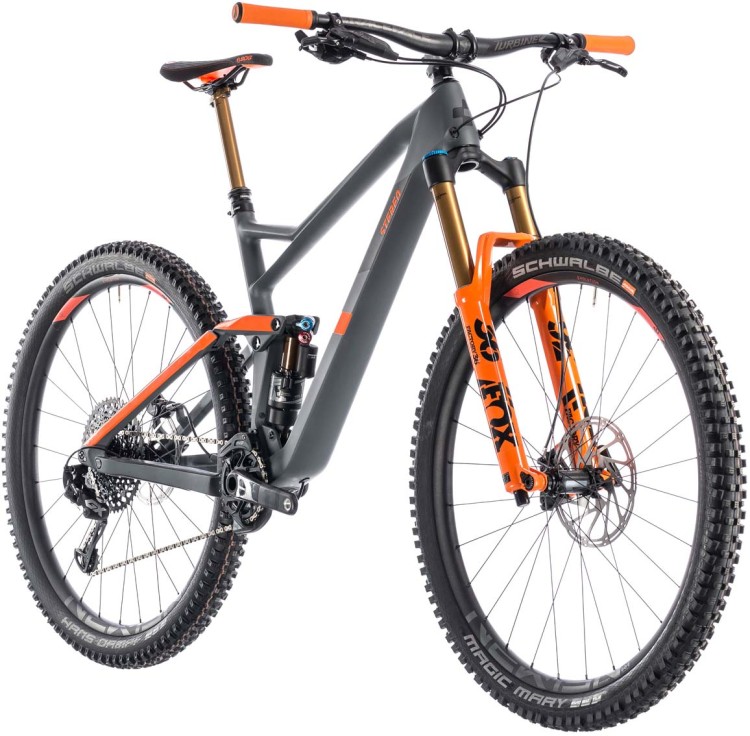 We recommend this accessories:

There was a time when mountain-taming descending ability came with a side order of uphill sluggishness. That time is firmly in the past. Meet the brand new Stereo 150 C:68 TM 29 - an enduro bike that'll reset your expectations. Built around a completely new frameset crafted from our premium C:68 carbon, the CUBE design team has created an extraordinary race-capable all-rounder that's almost as adept propelling its rider skyward as it is cashing in gravity credits on the way back down. Fox's 36 HSC fork and Float X2 shock work together seamlessly to smooth out the trail ahead, while Sram's reliable and wide-ranging GX Eagle 12 speed transmission delivers power to the Newmen wheelset via an X1 carbon crank. We even specced a Fox Transfer dropper post with Kashima coating, so you can get the saddle out of the way at the push of a button for tackling even the trickiest of super-steep drops. Ride every trail, everywhere, faster and smoother with the Stereo 150 C:68 TM 29.

Given a blank sheet of paper and a seemingly impossible design brief, the CUBE design team came up with a winner. A head angle designed around a 160mm fork gives solidly predictable handling, no matter whether you're spinning up a steep climb or barrelling down a mountainside. Meanwhile, a 75,5 degree seat angle combined with short 435mm chainstays combine to give agile handling and efficient climbing, aided and abetted by the stiffness-enhancing Boost 148 rear axle. There's internal cable routing for a 2x gear setup option, as well as built in ISCG05 tabs for a chain guide - so we've covered all the transmission bases. The whole lot is crafted from our premium C:68 carbon, lovingly sculpted into flowing lines with super-clean looks, a rocker cover and trunnion shock mount. More than just a pretty face, it's a frame that will rise to whatever challenge you throw at it.

For the competition-oriented driver who makes no compromises. Where others are saving money, these bikes are using their full potential. If you used to have to put together your own fully complicated bike, these BIkes will deliver the complete package perfectly matched to your home. Manoeuvrable, light and flexible in use - bikes for every occasion, the winner's podium, the Alpenpass and all those who look forward to hairpin bends!

What should one write a lot, the Stereo with 150mm travel is simply the hammer.

I've been on the road with the Fully for a while now and finally got me a super sports equipment. I've already tested it extensively and wanted to thank Cube herewith.

Write a review
Other 29" MTB Fullys (carbon) between 4000 € and 5000 €
Other 29" MTB Fullys (carbon) between 4000 € and 5000 €
This website uses cookies, which are necessary for the technical operation of the website and are always set. Other cookies, which increase the usability of this website, serve for direct advertising or simplify interaction with other websites and social networks, will only be used with your consent. Use of cookies More information
Decline I agree