Save up to 33%, all accessories reduced.
Our Brands Cube Ghost Scott Haibike Focus Trek Kalkhoff Diamant Winora
For our customers from the UK: Due to the current situation (Brexit) we cannot accept orders as the shipping companies do not deliver to the UK.
Categories
Information
Close filters

For your registration to our newsletter you will receive a 10 € voucher as a thank you.2

(In accordance with the data protection declaration, please send me regular and revocable information on the following product range by e-mail: Bicycles, fitness equipment and bicycle accessories) 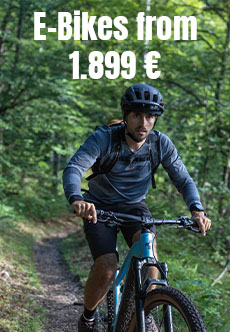 How does an E-Bike / Pedelec work

With the help of sensors, values such as torque, speed and cadence are detected, after which the engine supports you with the corresponding power.

The electric engine turns your muscle power into more power, which doesn't mean that you don't have to do anything, but that you simply become faster at the same cadence. Ergo: The faster you want to go, the faster you have to pedal and choose a higher support level. To do this you use the control unit on the handlebars. If you want to achieve as much personal effort as possible, lower the assistance level. However, if you are on the way up and you want more support, you can raise the level again.

We distinguish between front engine, mid engine or rear engine. Each concept has its advantages …

The front engines (hub engine) are among the cheapest drives and have been designed especially for entry-level models and deep-sea beginners. They also make it possible to install a back-pedalling brake, can be retrofitted, but have a slightly greater influence on driving behaviour than other engines. The reason is the centre of gravity. On wet roads, for example, it could occasionally be problematic, as the front-wheel drive cannot prevent the front wheel from spinning.

Rear mounted engines (hub engines) are very quiet and impress with their dynamic handling. These engines are also available as recuperation drives, which allows energy to be recovered. A further advantage is that they can be retrofitted, and rear drives can also be combined, for example with a derailleur system.

A disadvantage is that this type of drive does not allow a back pedal brake and the driving experience is occasionally perceived as unsteady.

The even distribution of the weight has a positive effect on the centre of gravity, which has little and above all no negative influence on the riding behaviour. These engines are suitable for all E-Bikes due to their robustness. Due to the special frame construction, retrofitting is unfortunately not possible. A back pedal brake is possible. In addition, the bike can be combined with a derailleur or hub gear system as desired.